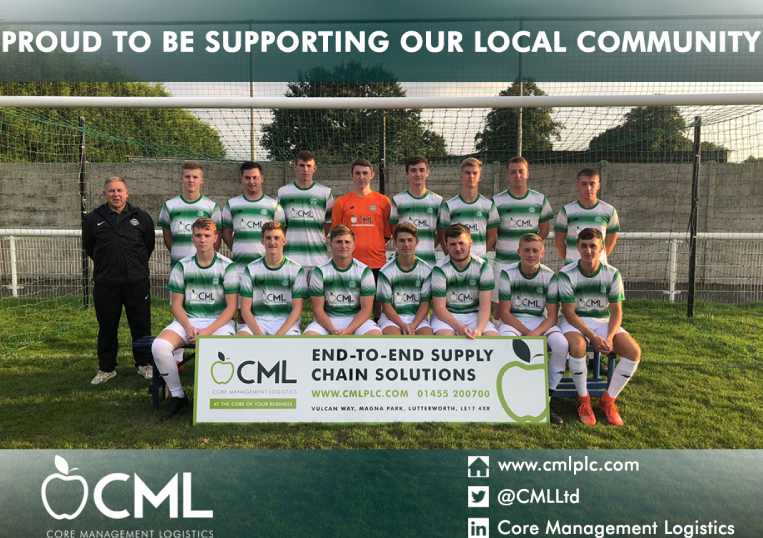 As part of CML’s ongoing commitment to help the local community, the leading third party logistics provider has sponsored the Lutterworth Athletic Football Club. This sponsorship will be for two seasons and will support the club significantly. With the help of the Lutterworth based business, the team has already been able to invest in a new football kit branded with the CML logo.

Commenting on the support it has received from CML, Ross Blockley, Manager at Lutterworth Athletic Football Club said: “We are extremely grateful for the financial help from CML and we can’t thank them enough for agreeing to sponsor the club. Without the assistance of businesses in the region we wouldn’t be able to provide our members with such high quality facilities. On behalf of the team at Lutterworth Athletic Football Club, I would like to say a big thank you to CML for their support.”

CML’s Commercial Director, Kerry Delaney, said: “Supporting the local community is extremely important to us, so it is our pleasure to be sponsoring the Lutterworth Athletic Football Club, and encouraging youngsters to have fun in a team. Everyone at CML is thoroughly looking forward to watching the club grow over the next two years and put our donation to good use.”

To find out about the Lutterworth Athletic Football Club visit, www.lutterworthathleticfc.com. 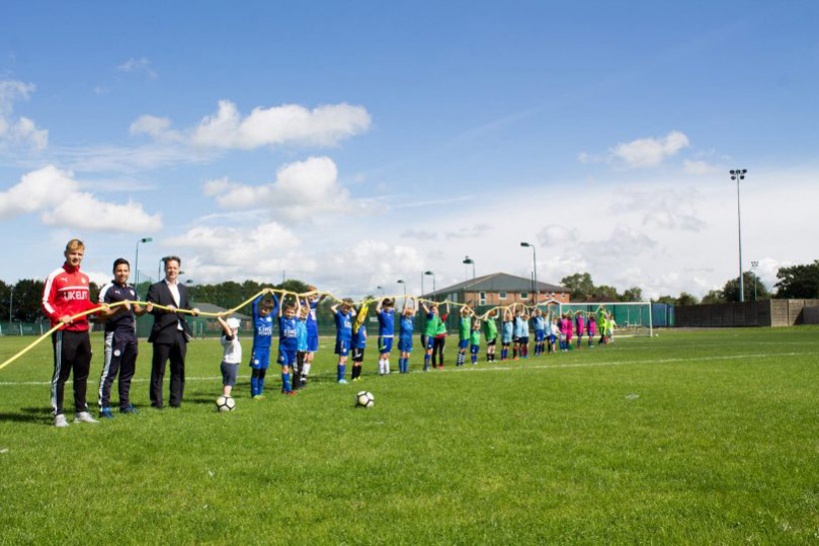 
Hello again and welcome to the second instalment of my blog, which is going to be a regular feature. Before I go any further, I’d like to say a huge thank you for all the interest in my opening blog.  It’s a great platform for me to share all the latest updates from Copely.  There is always something happening here – we certainly don’t stand still for very long and on a personal level, I’ve been rather busy.  I have been taking great delight in speaking to our existing customers, and welcoming new business accounts.  There’s certainly nothing dull about hose manufacture, and a lot more to it than meets the eye!

In case you think I’m cocooned in my office with my telesales hat on, that’s not quite true. They do let me out from time to time!  I recently visited Michael English, Chairman of the Lutterworth Athletic Football Club.  “What’s that got to do with hoses?” I hear you cry.  Well, Copely likes to support ventures in the local community as and when we can, so when our Operations Director, Steve Walton, was contacted by Michael to ask more about our Aquaflex irrigation hose for watering the pitches, he quickly spotted an opportunity to get involved. We duly sent Lutterworth Athletic Football Club some 50m coils of our fabulous Aquaflex hoses to try, with our compliments to show our support for the Club.

So, this is what took me on my outing to Lutterworth Athletic Football Club, to find out how they were getting on with the Aquaflex hose, and to learn a little more about the Club.

Michael explained that Lutterworth Athletic Football Club has been established since 1983 to provide the children and the youth of surrounding villages with the opportunity of playing local league football. It is non-profit-making organisation, and that’s why we were keen to show our support.

It was actually during the summer holidays when I met Michael, so there were a number of children doing summer camp activities on the day, all football related.  The Club itself is set on a large stretch of land which holds five pitches. Michael took me out to a new refurbished pitch where the Aquaflex hose was being used with a sprinkler system at the time. They were using two of the 50m coils of Aquaflex in the areas where the ground needed water the most, and it certainly seemed to be doing its job well.

A key feature of Aquaflex is its durability and water flow performance in all climates, which makes it ideal for pitch irrigation, as well as many other watering applications. It’s actually manufactured from a braiding technique unique to Copely, and is really flexible to use and kink-resistant.  So, when you want a heavy-duty, high-performance hose, Aquaflex certainly should be a consideration.

I asked Michael what had drawn him to Aquaflex. He explained they used to buy hoses from Travis & Arnold over the years, as we know to be Travis Perkins today.  Copely was a name that had been recommended to him, and being a local hose manufacturer, he checked out our website and got in touch with us.  To sum up, he is very happy with the product and the support the Club has received from Copely, as you can see from some of the photos we took on the day of our visit. 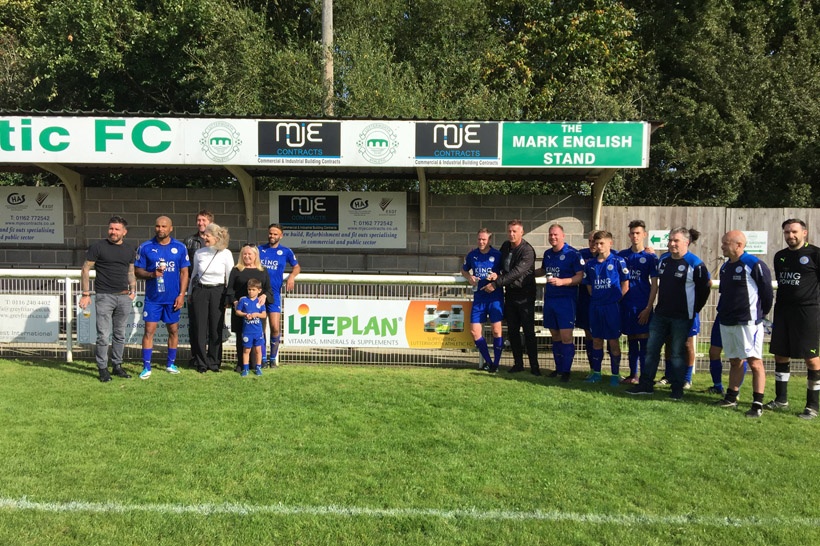 
Thanks to the Leicester City Legends for a fantastic game at the home of the Atho!

A great time was had by all and we look forward to welcoming you back again for another match soon. 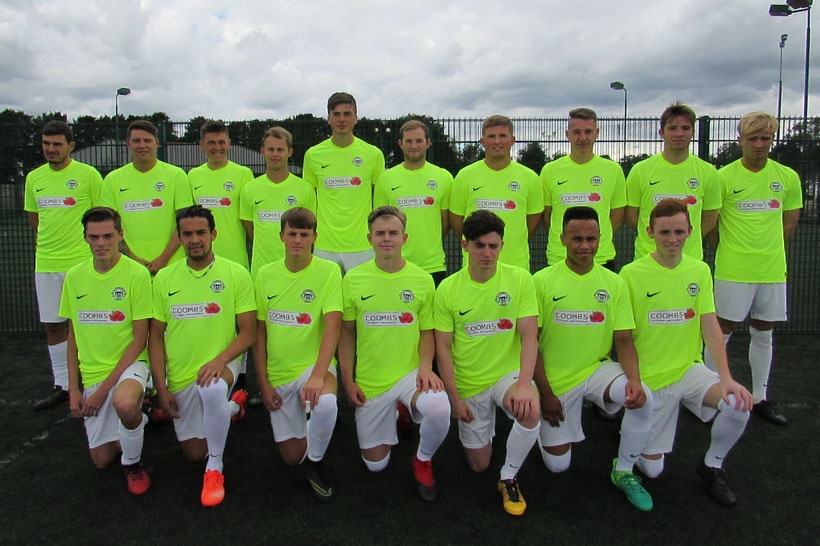 
A massive thank you to Coombs Catering Partnership in Lutterworth for sponsoring this seasons Nike training kit.

The lads unveiled this seasons new training kit at home to Raunds town on Saturday12th August 2017 before a quality performance which saw Athletic beat Raunds 5-2. All the lads and management team are delighted with the new training kit so a massive thank you again to Coombs from everyone at the Club! 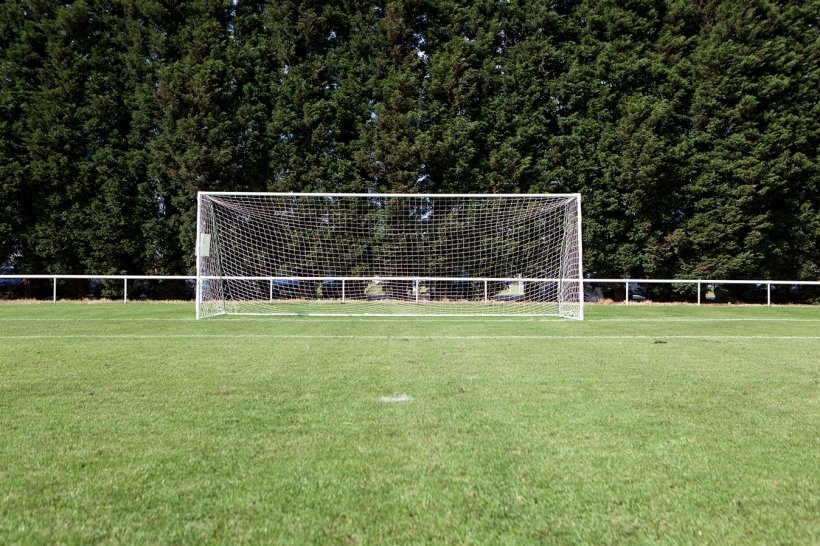 
The 2017/18 season is approaching fast! Pre season training has begun, and our first team and reserve team squads are training hard. The Atho have a big year ahead. Huge targets have been set on both an individual player and squad basis. Part of our pre-season conditioning and squad selection process is to play several tough friendly fixtures against opponents that will test our skills, character, confidence and ability to work as a team! With that in mind, here's the confirmed list of pre season fixtures for Lutterworth Athletic FC:

For more information relating to any of the fixtures above, please contact us on 07798896586.

MICK ENGLISH IN FOOTBALL FOR OVER 30 YEARS 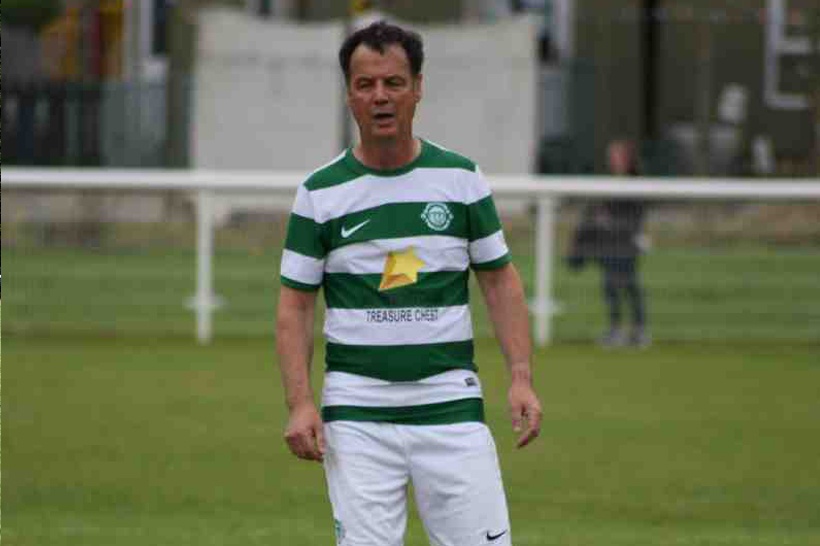 
Mick English has now been involved in Football with Lutterworth for 30 years! To celebrate this outstanding achievement, Leicester City Legends faced off against Lutterworth Legends in a friendly game.

Mick was one of the youngest players to play for Lutterworth town making his first team debut at the age of 16 in the Leicestershire senior league. In 1986 Mick was asked to manage Lutterworth juniors under 8s at which time his son lee was playing. He managed through all the age groups up to under 18s and was part of the triple winning Hinckley athletic flood lite under 18s. In 1993 along side long term friends terry water field and Steve rendell he set up Lutterworth athletic joining the Leicester district league div 2.

Since then athletic have achieved great success with 7 promotions and success in both the league and county cups along the way.

Mick is now in his 28 year as a manager and 22nd year at the helm of the athletic first team. Mick is also chairman of the club.

Thank you to the Leicester City Legends for a fantastic game, and to all the supporters who turned up to watch the game.